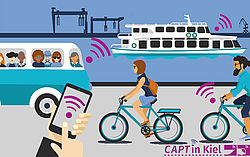 As the population increases and mobility requirements are correspondingly high, sustainable and environmentally friendly local public transport is becoming a central challenge for the city. The project CAPTin Kiel pursues the objective to lay the foundation for autonomous mobility making public transport more attractive in Kiel.
Hereby, the focus is on bus and ferry connections between the university locations of Kiel. In particular, the main traffic axis connecting the west and east banks is burdened with high levels of pollutants. At the same time, the project intends to make the city of Kiel more attractive in the fields of research and innovation.

CAPTin Kiel is part of a set of measures called “Green City Plan” that aims to reduce exhaust emissions.
The project is initiated by the Kiel University (CAU) which has already set up several task forces working on the subject of autonomous traffics. Players from universities, maritime industry, administration and municipal policy are involved in the project as well.

sented by the ministry of economy and the ministry of environment. In parallel with the project, Schleswig-Holstein is testing the development of a test area and the realisation of a maritime technology centre.

The overall duration of the project is four and a half years. The project currently is funded by the CAU.

DSN was engaged by the Presidium of the CAU to do the project management, the coordination of the entire project and the assessment of financing options.

"I would like to thank you for your support and all your help in Technet_nano project. I have participated in many European project so far and this is the first time when management is on that high level as DSN’s."
Bartlomiej Plonka, Silesian Science and Technology Centre of Aviation Industry Ltd., Polen