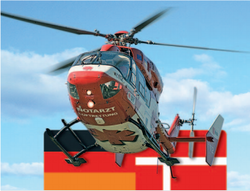 This project was the first cross-border cooperative initiative between Germany and Denmark in the field of airborne rescue. Its aim was to establish an economically workable and long-lasting air rescue service in the German-Danish border region. The German-Danish Cross-Border Air Rescue Service is a reliable and fast emergency resource for citizens on both sides of the border. In Denmark this was the first time that an air rescue service of this kind has become available.

Also after the ending of the project the rescue helicopter " Christoph Europa 5" flies and therefore assures a save and fast emergency care for citizen on both sides of the border.

"I would like to thank you for your support and all your help in Technet_nano project. I have participated in many European project so far and this is the first time when management is on that high level as DSN’s."
Bartlomiej Plonka, Silesian Science and Technology Centre of Aviation Industry Ltd., Polen